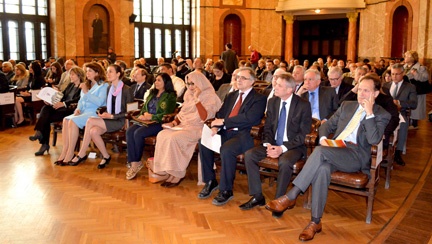 On May 25, 2017, the Group of African Ambassadors, Heads of Missions and Honorary Consuls in Bulgaria celebrated Africa Day at the Aula of the Sofia University “St. Kliment Ohridski” with a conference on “Bulgaria - Africa - 21st century and beyond”. Mr. Maxim Behar, Honorary Consul General of the Republic of Seychelles in Bulgaria, also took part in the initiative.

“This year we celebrate the 54th anniversary of establishing the Africa Unity Organization, later named the African Union”, says H.E. Mrs. Manal El-Shinawi, Ambassador of Egypt to Bulgaria, “The conference proved that Africa has huge potential for cooperation in economic, energy and academic terms, and that this potential should be used.”

The aim of the conference is to turn the attention to the various significant opportunities for cooperation with African countries. The speakers at the prestigious forum discussed the subjects of Africa’s economic prospects, sustainable development of African economies and their unique place in today’s globalized world, energy, as well as partnership opportunities and exchange in education.