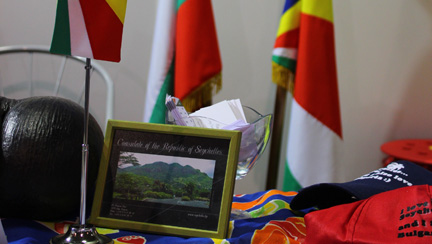 The Honorary Consulate General of the Republic of the Seychelles supported the Annual Charity Bazaar of the International Women’s Club Sofia once again this year. The event has been raising awareness and money for educational programs, programs for de-institutionalism and social integration, support for people with disabilities, women and older people and also children without parents’ care for 22 years now.
The stall of the Seychelles helped by offering traditional Seychellian tea as well as a variety of souvenirs, brought directly from the beautiful islands. Bracelets, magnets, picturesque landscapes, Seychellian coins and traditional flower garlands contributed to the colorful diversity of the stall. Two coco de mer coconuts were the biggest attraction for the visitors as the tree they grow on can only be found on one of the Seychelles’ islands (Praslen) and is protected by UNESCO. The Honorary Consul General of the Republic of Seychelles to Bulgaria – Mr. Maxim Behar was there himself and shared stories of the beautiful island with the visitors.

Over 2000 volunteers took part in the event and the public set a new record – a total of 9000 people spend their day exploring more than 60 cultures represented at IEC’s halls. The Charity Bazaar raised 290 000 for the Charity organization of the International Women’s Club Sofia and even more donations from corporate sponsors are expected. The final sum raised for charity by the IWCS will be announced in the end of January when the application process for funding will start.