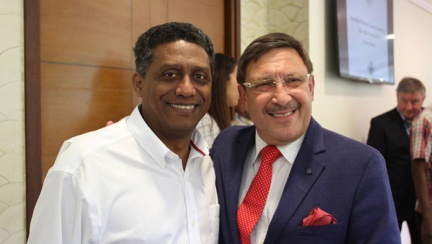 The Honorary Consul General of the Republic of Seychelles to Bulgaria – Mr. Maxim Behar had the pleasure to personally congratulate the new Seychelles President – H.E. Danny Rollen Faure, for his inauguration, who took office on October 16, 2016. He is the fourth president since the island nation gained independence from Britain.

“As your President, I believe that for Seychelles to really achieve national unity in every sense, we must undergo a process of true reconciliation,” said Faure at a official ceremony held at State House in the capital, Victoria.

“We must see the diversity within our unity as a new force that strengthens this national unity that we truly want for our Seychelles,” he added.

Mr. Behar attended the 8th season of the Seychelles Honorary Consul Conference being held from 24 to 26 October 2016 at the Savoy Resort and Spa where he has the opportunity to meet with H.E. Danny Rollen Faure.

„A good start of a great conference today in Victoria, Mahe Island, Seychelles with hundreds of people who would like to see better and most developed peaceful Seychelles. First friendly meeting also with the new President, who took the office just a week ago“ said Mr. Behar.