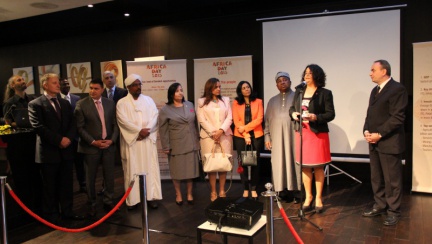 The Africa Day 2015 Celebration brought together the Ambassadors of six countries accredited to Bulgaria (Algeria, Egypt, Libya, Morocco, Nigeria, Sudan and South Africa), alongside the Honorary Consuls of Ghana, Kenya, Mali, the Seychelles and Uganda. The event under the motto "Africa: Land of great opportunities" was held under the patronage of the Bulgarian Minister of Foreign Affairs Daniel Mitov in Sense Hotel Sofia on May 25.

Mutual effort in Africa-Bulgaria ties could bring about cross-investment, more substantial economic exchange and closer human relations, the Dean of the Group of African Ambassadors to Bulgaria has said.

During the celebration H.E. Mrs Latifa Akharbach, who is also the Ambassador of Morocco to Bulgaria, outlined the cooperation potential Bulgaria has with the continent, but also raised awareness of a more dignified place for Africa in the global system.

Mrs Akharbach stressed the importance of being aware that "beyond the daunting challenges still looming ahead, the Continent is already an inestimable contributor to the development of economic exchanges and the creation of wealth in the world."

She called on Bulgaria to avail itself of the positive way it is perceived in Africa - as a country that previously supported development by transferring knowledge and expertise through engineers, mathematics and physics teachers who worked in Africa in the past.

In his speech the Deputy Foreign Minister Valentin Poryazov also voiced his conviction that for Bulgaria and Africa there was a long road of cooperation ahead, with much work to be done on both sides.

The Africa Day 2015 event featured African dishes from all the countries which took part, and also traditional music and dances which took the floor after the official part ended. An exhibition of handicraft items from around the continent was on display all the time.