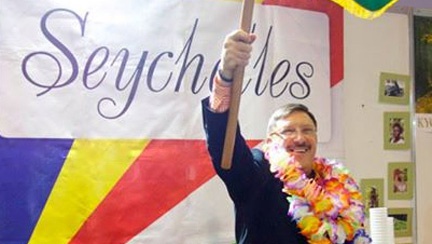 The traditional Charity Bazaar of the International Women’s Club-Sofia took place on Sunday, 7 December 2014. This was the 20th Jubilee Bazaar and it was under the patronage of Bulgarian President Rosen Plevneliev. More than 6000 people attended the event, which made it the most successful Charity Bazaar so far.

More than 50 stalls took part in the Bazaar, 40 of them representing different countries. Charity organizations, which are supported by the International Women’s Club-Sofia, had their own 6 stalls. There were also book, clothes, toys stalls, children corners, workshops, etc.

The diplomatic society in Bulgaria actively participates in the organization of the Bazaar and hundreds of volunteers coming from different parts of the world helped as well. The local and foreign Business also supports the International Women’s Club-Sofia.

The Consulate of the Republic of Seychelles in Bulgaria presented the exotic country with its typical Coco de Mer (coconut which only grows on the Seychelles and was designated by UNESCO) and with unique tea from the island. The visitors of  the Bazaar felt the Seychellian spirit, buying some traditional souvenirs.

The Bazaar is entirely charitable. Although the event gives various entertainments from all over the world, its main purpose is to provide finance for the projects, initiated by the International Women’s Club. The money received each year are used for educational programmes, projects for children's integration, for supporting children without parental care, for supporting people with physical disabilities, women in need and old people.