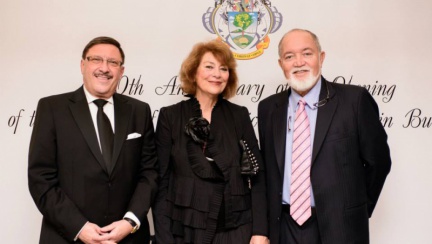 Founding President of the Republic of Seychelles sir James Mancham visited Bulgaria to take part in the official reception on the occasion of the 10th anniversary of The Consulate of The Republic ofSeychelles in Bulgaria. The reception was held by the Honorary Consul in Bulgaria Maxim Behar.

“I am honored to take part in that unique party, attended by intelligent and successful people, who came to give their respect to our country and our Honorary Consul. Our government gave really high raiting to Mr. Behar. His participation in various global organizations, his sustained efforts on improving the image of Seychelles and his affection for the country cannot be ignored by President James Michel and Minister for Foreign Affairs Jean-Paul Adam”, said sir Mancham.

"What has really attracted me in Seychelles is not only the nature, but mostly the smiling, hard-working, dedicated and reliable people”, said Maxim Behar, who was appointed a Honorary Consulof the Republic of Seychelles to Bulgaria by the Seychelles President James A. Michel exactly 10 years ago.

Some members of the Cabinet, diplomats and businessmen took part in the event as well.