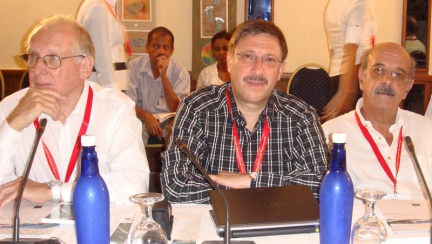 The Seychelles Honorary Consul to Bulgaria Mr. Maxim Behar attended the regular Conference of the Honorary Consuls with the Seychelles's Government, which took place in Victoria October 23 - 25, 2008. Honorary Consuls were greeted in Plantation Club Hotel by the president James A. Michel, by the Minister of Foreign Affairs Patrick Pillay and the Principal Secretary Callixte d'Offay. Mr. Behar took active part in the different discussions and also took part in the reception given by the president James Michel and his wife Nathalie Michel at the State House in Victoria. Honorary consuls all over the world accepted a Road Map/ Mission Statement of the Seychelles's Honorary Consuls around the world. They also had a special session on the idea of establishment the first University in the Republic of Seychelles.