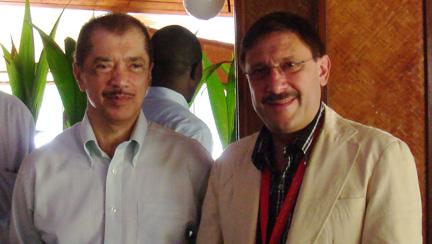 Seychelles President James Michel expressed satisfaction with the development of bilateral relations with Bulgaria at a meeting in the capital Victoria with its Honorary Consul to Bulgaria Maxim Behar. Mr. Behar attended the regular meeting of the Honorary Consuls with Seychelles Government in Victoria. "It is an honor for me to work for boosting bilateral relations and to represent this beautiful country in Bulgaria," Honorary Consul Maxim Behar said after the meeting. The two agreed that the process of bringing the two countries closer was boosted significantly after the Indian Ocean Island country decided to open a consulate in Bulgaria and appointed Honorary Consul in 2004. A student from the Republic of Seychelles is expected to arrive in Bulgaria in the short term to continue his education here. A Bulgarian delegation, led by Deputy Foreign Minister Feim Chaushev, visited the Seychelles in October 2006.