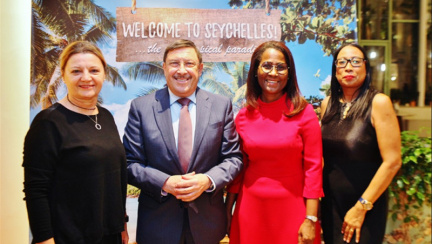 Nature Preservation is a top priority for the Republic of Seychelles

In the Seychelles, the number of tourists is controlled so as not to disturb the ecosystem. The balance between profit and nature conservation is a priority for the government and the 90,000 citizens of the African country, consisting of 116 islands located on three archipelagos in the Indian Ocean. The number of cars is also limited, and on some of the islands the movement of cars is completely prohibited. There are no large-scale business projects and constructions here. A culture of tourist entertainment has been built, which is different from the mass offered and is closer to the natural way of life.

This was said by Bernadette Willemin, Director-General for Destination Marketing at the Tourist Board of Seychelles, who is here at the invitation of the Honorary Consul General of the Republic of Seychelles in Bulgaria – Maxim Behar. Yesterday, Bernadette Willemin met with the Deputy Minister of Tourism, Irena Georgieva, to discuss the possibilities for deepening the contacts between the two countries.

In the last year, the number of Bulgarian tourists who visited the Seychelles has increased significantly, thanks to the charter programs that some travel agencies offer, noted Maxim Behar.

The representatives of Seychelles gave Irena Georgieva the typical beach scarf (pareo) for their country and showed her the three ways to use it.