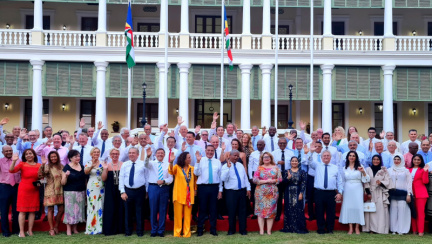 Maxim Behar, Honorary Consul General of the Republic of Seychelles in Bulgaria, attended the Opening Ceremony of the Annual Honorary Consuls’ Conference at the State House in Victoria. Among the distinguished guests were the President – Wavel Ramkalawan,  governmental officials, and Honorary Consuls of the Seychelles worldwide.

Maxim Behar had the opportunity to catch up with his colleagues from all over the world and to discuss new ideas on how to promote the Seychelles as a tourism destination in Bulgaria. The Honorary Consul General suggested interesting projects to the President Wavel Ramkalawan on the further development of business and cultural relation between the countries.