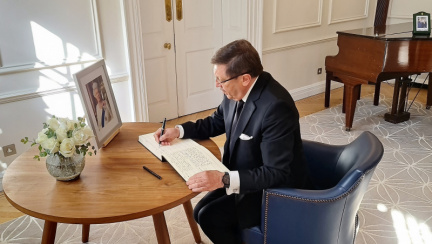 Following the passing of Her Majesty Queen Elizabeth II the Honorary Consul General of the Republic of Seychelles in Bulgaria, Mr. Maxim Behar, formally conveyed his sympathy through the signing the condolence book at the British Embassy in Sofia.

In his message of condolence Mr. Behar expressed his deepest condolences to the Royal family on behalf of the Seychelles Honorary Consulate General in Bulgaria and on his personal behalf as an international fellow of the PRCA and the past President and current Board Member of the Bulgarian Business Leaders Forum (BBLF), which was established with the support of His Majesty King Charles III.

"The Queen’s remarkable 70-year reign as Britain’s longest serving monarch will be always remembered and her loss will be felt greatly by millions of people across the globe. Her profound sense of duty and selfless devotion to her great nation is an inspiration to us all.", Maxim Behar wrote in a personal condolences letter to His Majesty King Charles III.

Seychelles State House said in a statement that the President Mr. Wavel Ramkalawan has given the order that on the day of the funeral of Her Majesty Queen Elizabeth II, on Monday 19 September 2022, all National Flags of the Republic of Seychelles should fly at half-mast.