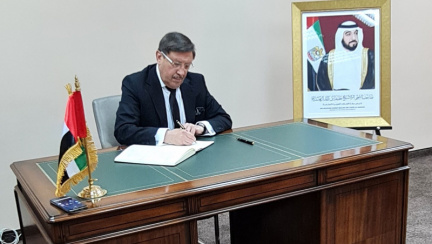 Following the passing of His Highness Sheikh Khalifa Bin Zayed Al Nahyan, President of the United Arab Emirates, the Honorary Consul General of the Republic of Seychelles in Bulgaria, Mr. Maxim Behar, formally conveyed his sympathy through the signing the condolence book at the UAE Embassy in Sofia.

In his message of condolence Mr. Behar wrote: “On behalf of the Seychelles Honorary Consulate General in Bulgaria, the Government, the people of Seychelles, and on my personal behalf, I wish to express our deepest condolences to the family, the government and the people of the UAE on the passing of His Highness Sheikh Khalifa Bin Zayed Al Nahyan. He will be remembered as a great leader of his country and its people, and also a great friend of the Republic of Seychelles."