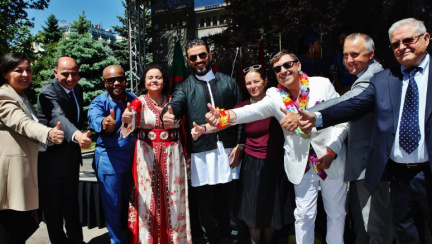 One of the most colourful events of the year - Africa Day 2022 - took place in Sofia on 21 May. Traditionally, the Honorary Consulate General of Seychelles took part with the very attractive local sea coconut Coco de Mer, beautiful Seychelles jewelry and photos of paradise beaches. The booth was one of the sunniest and most visited places at the festival and the Honorary Consul General, Mr. Maxim Behar, was able to recreate the island mood, celebrating and taking pictures with all the guests to traditional Seychellois music.

The celebration, besides being united by a wonderful charitable cause, also aimed to promote the cultural values of the countries that participated. This year the event was attended by the Embassies of the African countries of Algeria, Angola, Egypt, Libya, Morocco, Nigeria, South Africa, as well as the Honorary Consulates of Seychelles and Sudan in Bulgaria.

The visitors to Africa Day 2022 had the opportunity to enjoy a varied programme including authentic dances, music, songs, performances that reflected African identity and culture. They also had the chance to purchase various African cultural artefacts, traditional clothing, jewellery and accessories, as well as taste some typical African cuisine. The profit from this year's event will be donated to For Our Children Foundation.

Africa Day is celebrated annually around the world to commemorate the founding of the African Union, an organisation that has been seeking indigenous African solutions to continental problems for 59 years and develops a new concept each year. This year marks the African Year of Nutrition: 'Strengthening resilience in nutrition and food security on the African continent: Strengthening agro-food systems, health, and social protection systems for the acceleration of human, social, and economic capital development'.

You can watch a video from the event here.