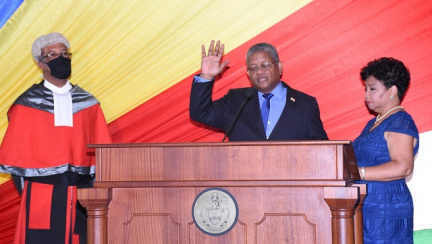 Wawel Ramkalavan won the three-day presidential election on 22-24 October 2020, leaving the incumbent Seychelles President Danny Faure in second place. Ramkalavan won nearly 55 percent of the vote and ushered in a new era of political leadership after decades of unsuccessful run for the presidency.

The new president’s swearing-in ceremony was held on October 26 at the State House.

During the election, 35,562 people voted for the new president out of total 74,634 eligible voters. His rival, Danny Faure of the United Seychelles party won 28,178 votes, or nearly 44 percent.

This year, the political party Linyon Demokratik Seselwa won more than a two-thirds majority in the parliamentary elections, held at the same time as the presidential election. The LSD won 20 out of the 26 districts in the National Assembly election with the remaining six going to United Seychelles.

On October 25, the 59-year-old head of state, who ran for president for the sixth time, was declared the winner by the chairman of the Election Commission - Danny Lucas

Wawel Ramkalaven thanked his predecessor Danny Faure for his contribution to the development of the Seychelles, urging him to continue his good work in the future.

Faure, who took over when former President James Michel resigned in October 2016, accepted and agreed with people's decision. "I congratulate Ramkalawan as the newly elected president of the Republic of Seychelles. I wish you all the best...You can count on me," the former president added.

According to Wawel Ramkalavan, the LDS will not make decisions on its own. "We want a national consultation, a consultation inter-party so that we don't repeat the same mistakes done in the past. I ask that this new National Assembly takes its responsibility in a serious and constructive manner. We have talked about the new role we want members to take in their respective districts," he added.

As for the formation of the cabinet, the newly elected president said specific names were already being discussed - from experienced politicians to professionals in various fields.

The Seychelles is an archipelago in the western Indian Ocean. The tourism-dependent island nation has been hit hard by the pandemic. Urgent measures are needed to overcome the COVID crisis.

According to the International Monetary Fund, Seychelles' economic downturn is expected to reach 13.8% by the end of the year due to outstanding debts since 2008, when the government requested assistance from the Fund.